That’s the Dynasty we know and love!

Dynasty Season 4 Episode 9 introduced a scene-stealing new character played by Laura Leighton, peeled back the layers on the dynamic between Alexis and Dominique, and so much more.

It was crazy, filled with soapy goodness, and may well be gasp, the best episode of the series.

Leighton’s arrival found the show staging a Melrose Place reunion as she reunited with Grant Show.

I’m still not buying Blake working with Fallon at Fallon Unlimited, but if it keeps them on the same side for longer, it’s worthwhile in my book. 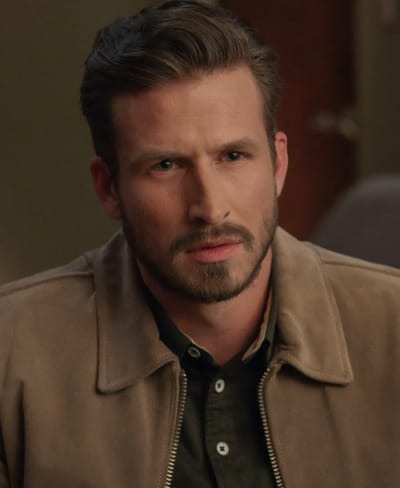 Corinne was poised to be a villain thanks to Leighton’s previous roles, but Corinne was probably one of the most genuine characters to grace the series.

Digging into Liam’s past is an exciting direction to take things, and if Corinne knows all about the dodgy dealings that may or may not have killed his father, we may get more of Leighton on the show.

If you watch Dynasty online, you know Liam has not been given a decent storyline to work with in a long time. He’s basically been saddled with storylines that prop up Fallon and their relationship, but now it’s his time to shine.

There’s a mystery surrounding what happened to his father, and it may well be more interesting than the “Oh, god. Who’s in the casket?” schtick that’s been handled woefully since the jump.

The only issue I have with Liam’s fact-finding mission is that it will likely bring his mother back into the fold. She’s a sketchy character who will go to any lengths to manipulate everyone in her life, but maybe this will be the thing that allows Liam to draw a line under their relationship.

I also appreciated how the show recognized that Fallon makes her own decisions, irrespective of whether they have cataclysmic consequences for her relationship. It was a harsh lesson, but at least Fallon realized the error of her ways before it drove them apart.

Corinne: You wouldn’t believe what some CEO types try to ply me with.
Liam: Fancy seafood, pricey vintages of champagne, live lobster.
Fallon: Point made, darling.
Corinne: And more, which is why it’s been so pleasant to just catch up with an old friend.
Fallon: Well, now that we’re all old friends, I do have a tiny little request to run by you. Of course, I don’t want to cross any lines.
Corinne: I assume you want my help moving along your SEC review.
Fallon: Okay, you didn’t tell me your friend was a mind reader, Liam.
Corinne: I saw your prospectus come through this morning. It’s just impeccable.
Fallon: So, it’s a yes, then.
Corinne: No, I can’t get to it for at least two months. My dense card is quite packed with companies these days.
Fallon: But their applications can’t be as good as mine, right? I mean, you said impeccable.
Corinne: No, they’re not, especially not the one I’m working on right now.
Fallon: Oh, it’s a tech company, I bet? Millenials are the laziest.
Corinne: More infomercial than anything, but I can’t talk about it.
Fallon: Okay, I understand.

We waited so long for them to get together, and if there’s needless drama for the sake of drama, it’s easy to spot. The true test will be whether this is the sole time Fallon will choose her love for Liam over her company.

Alexis and Domonique being stuck in the mine was more satisfying than I thought it would be. They are on similar paths in life, trying to find acceptance from their kids, and seek what is rightfully theirs.

It’s a shame it took them almost dying to realize that they have much in common. The sad thing was how they both spent eons in the cave before anyone even recognized they were missing.

The entire situation will have bonded them for life, but with Blake consistently meddling, will they ever be able to work on the same side?

Digging for diamonds in the mines is a fun plot and all, but Michael Michele and Elaine Hendrix were so believable in these scenes that they revealed more vulnerable sides to their characters.

The humor was also very much present, particularly Alexis complaining that there were no gluten-free options. Unfortunately, the mansion staff doesn’t take orders in the mines.

Jeff, Fallon, and Adam will probably be surprised if these women ultimately become friends, but it felt like a natural development given the circumstances.

Cristal’s outlook is dire, and Adam is trying everything he can to help. Adam is a loose cannon who should not be working in a hospital, but something tells me he will find a way to save Cristal, allowing him to build a connection with his father.

Liam: So, Corinne, when was the last time we saw each other?
Corinne: I know exactly when it was. Your 18th birthday.
Liam: Oh, right. My mother had too much chardonnay and fell in the pool.
Corinne: Laura was in fine form, but I remember that day as the last time I saw your father in good spirits, despite everything.
Liam: What do you mean, despite everything?
Corinne: You know, uh, everything going on with the tankers.
Liam: I’m not sure your timeline makes sense.
Corinne: Maybe we should just drop it.

All of the backstabbings between Adam and Blake is tiring, but at least Blake now knows the truth about what Adam has done to him in the past.

It would be too predictable to kill Cristal off, so the more likely scenario here is that she will go into a medically induced coma to give Daniella Alonso time away from the show to welcome her little bundle of joy into the world.

Jeff and Culhane’s battle for the affection of Mia was pretty embarrassing, but at least Mia realized going between the two men was sure to ruin what was blossoming into a good friendship.

Jeff and Culhane need to play on the same side because of the past. Circumstances have put them against one another too many times, so the resolution of the love triangle was needed.

Oh, I’m sorry, is my trapped in a mine behavior not up to your standards?

What is it with this show and love triangles? On Dynasty Season 4 Episode 8, we had Sam hooking up with an ex and hiding it from his current lover, and this time, we had Kirby slowly getting closer to her ex.

For an episode bursting at the seams with much-deserved drama, Kirby with her ex could have been removed from the edit, which would have made for a better episode.

“Equal Justice for the Rich” proves that Dynasty can deliver when it wants. The writers need to plant seeds to sprout later in the series.

This was a solid step in the right direction.

What did you think of all those revelations?

Are you tired of the love triangles?