Hilarie Burton Reveals Jeffrey Dean Morgan Auditioned for One Tree Hill: ‘I Would Have Definitely Had Kids Earlier!’

Hilarie Burton met husband Jeffrey Dean Morgan after her exit from One Tree Hill in 2007, but it could have been much sooner.

On Monday’s new episode of the Drama Queens podcast, Burton dished that Morgan auditioned for The WB/CW teen drama and would have played a pivotal role.

“When I met Jeff, he was like, ‘Oh, I auditioned for that show.’ I’m like, ‘Wait, what?’ My husband, Jeffrey, auditioned for [Craig] Sheffer‘s part,” Burton revealed, confirming he almost played Keith Scott.

“He was like, ‘Yeah, you know, I liked the whole gritty garage guy, that edgy thing.’”

The actress had a hilarious take on the matter:

“Had Jeff shown up in those tight jeans that Sheff was wearing, I would have definitely had kids earlier!”

Burton and Morgan found their way to each other thanks to Morgan’s Supernatural costar Jensen Ackles and Burton’s One Tree Hill costar Danneel Harris.

They share two children together, and they recently shared the screen on The Walking Dead Season 10 Episode 22, an episode devoted to Negan and Lucille.

It was a fantastic episode that shed light on more aspects of the character of Negan and what shaped him into the leader of the Saviors.

As for the Drama Queens podcast, it was recently launched by Burton, and One Tree Hill co-stars Sophia Bush and Bethany Joy Lenz.

This week’s episode also found them reminiscing about scenes from the past, and one, in particular, found Peyton coming out of the shower and walking by his father, Dan, in her towel.

“I, still, as a married woman, couldn’t do that — just traipse by in my towel in front of my father-in-law,” Burton explained, before opening up about going to dinner with her parents and Dan actor Paul Johansson.

Burton revealed that she and Johansson laughed together, and her parents said she was not allowed to date him. 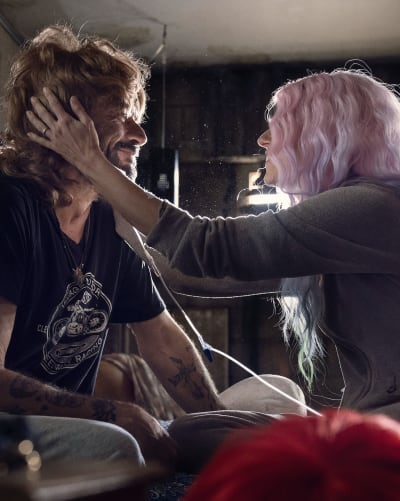 “It had never occurred to me,” said the actress.

“Paul’s the same age as my husband and so, like, the whole element of, like, traipsing around, semi-dressed was so loaded and weird.”

“I remember that feeling of, I was never allowed to watch these shows growing up, and here I am right smack dab in the middle of it!”

What about you, TV Fanatics?

Do you think Morgan would have been great on One Tree Hill?