This Is Us Round Table: Which Bachelor Party Would You Attend?

Our This Is Us Season 5 Episode 15 Round Table team discusses which party they enjoyed more, what the most emotional moment was, and our hopes for This Is Us’ season finale and beyond.

Read on for our thoughts!

Kevin and Madison both had non-traditional bachelor/bachelorette parties. Which one did you enjoy more and why?

Carissa: I enjoyed Kevin’s more because I would have felt deeply uncomfortable at Kate’s.

Painting a nude would do nothing for me because I’d just be frustrated that I can’t paint. They all had relatively artistic versions, which seems unlikely.

And that video? Ugh. I know better than to ask those types of questions the day before someone gets married. That’s not the time for that kind of discovery.

Christine: I’d probably go with Madison’s just because the ladies seemed to be having a lot more fun both with the painting and with bashing the model for having ghosted Madison.

Although, I have to say I was shocked they didn’t send him packing when they found out he and Madison used to date.

Sarah: I definitely laughed more at Madison’s and cried more at Kevin’s. But I do love a good heart-to-heart around the campfire, so I’d probably pick Kevin’s.

It was great to see the boys get some things off their chests and support one another.

Jack: I prefer being out in the woods/at a cabin and would probably fit in better with the guys anyway. So I vote for Kevin’s even though Madison’s cracked me up too.

After Miguel talked about his relationship with Rebecca, we got a short flashback of him reassuring her that love would find her again. Do you think this is the beginning of This Is Us finally showing us Miguel and Rebecca’s love story?

Carissa: It’s either the beginning of that or a way to appease us for never showing how they began.

It would be a disservice to end the show without showing that relationship bloom since Jack wasn’t Rebecca’s forever person and how Miguel has stepped up and into his enormous shoes, ultimately caring for her when she needs it the most. 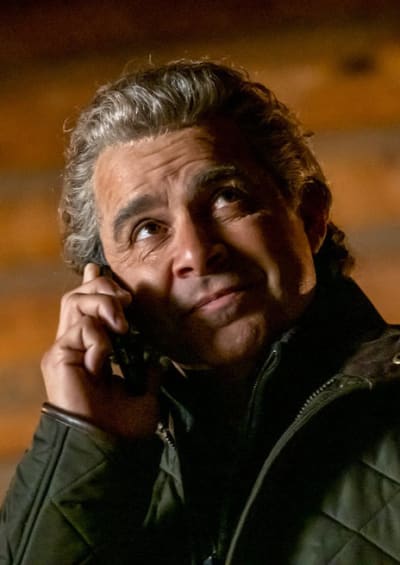 Christine: It better just be the beginning!

I’ve waited five seasons to get their story, and this teeny, tiny, little glimpse wasn’t nearly enough. I

Sarah: I sure hope so! I would never have thought that when this show started that I’d be dying to see more of Rebecca and Miguel’s love story, but here we are.

It’s the one thing that we have been really missing from the flashbacks, so I hope we get an episode next season dedicated to them finding one another.

Jack: Agreed with all of the above. I really NEED more of Miguel and Rebecca’s story! This Is Us had better not just be teasing us.

Carissa: I expected that. I wish it weren’t another storyline to pack into the final season when I’d prefer more flashforwards to what will be other than how we get there.

Christine: Leave it to Nicky to wait as long as humanly possible.

I’m curious to see if Sally’s still alive and what happened to her.

But as Carissa said, there’s very little time left in the series and other characters’ stories I’m far more interested in seeing get airtime.

Sarah: To your point, Carissa, perhaps Sally is somehow involved with the flashforwards we have seen so far.

I have no idea how or why that would be, but This Is Us continues to surprise me. I wouldn’t be shocked if Sally, or Nicky’s quest to find Sally, is an integral part of their future.

Jack: Nicky is my favorite secondary character, so I’m excited for what develops from this! I hope he gets his happily ever after at this late date.

What was the most emotional moment during the bachelor parties?

Carissa: Not the question for me, but I think Kevin and Madison questioning whether they’re right for each other will have a positive result.

It just bums me out that this is a trope repeatedly explored as if nobody ever feels confident in their marriages.

I am not married, but many of my friends knew they were with the right person and enjoyed the wedding and everything that came with it. I’d love to see that kind of story someday somewhere other than Hallmark.

Christine: I think the cold feet make sense here because of the way Kevin and Madison got together.

Unfortunately, I think it’s difficult not to wonder if you only ended up getting married because of the kids. I don’t think anything is going to alleviate those doubts other than time.

I found the most emotional moment to be the quietest.

It was Madison rewatching Kevin’s video at the end. I could feel the worry burning a hole in her stomach that he appears not to envision a long-term future for the two of them.

Sarah: I understand the doubts they have as well, and I’m glad they’re addressing them because Kevin and Madison have moved quite fast in their relationship.

But I truly hope that they’re able to come together and get married.

They’re good for one another.

Other than that, the most emotional part for me was Rebecca’s pep talks to Beth. Those got me real good.

I love their relationship so much, and I’m so happy that Rebecca encouraged her to pursue a job at those dance schools.

Jack: I’m with you, Carissa. It makes sense that Kevin and Madison would have some doubts, but it drives me nuts that TV is so full of people who are worried they are making a mistake on the eve of their wedding.

For me, the most emotional moment was Rebecca thanking Beth for making her feel normal.

TV so often focuses on how hard it is for caregivers when someone has Alzheimer’s or a similar issue, but rarely on how it feels for the person who knows that they are eventually going to literally lose their mind.

Discuss anything not covered above.

Carissa: Everyone’s been worried about Toby, but revealing his feelings around the fire was nothing we hadn’t all uncovered ourselves.

The worrisome part is putting himself up for a job in a different city without consulting his wife. Do these people not watch TV? Geez.

It doesn’t take a psychologist to realize what a dumb move that is.

Then again, since Kevin thinks working as a TV actor is scraping the bottom of the barrel, I guess they really are quite sheltered.

Christine: Yeah, Toby putting in for that job without discussing it with Kate was a giant red flag, especially since she just found a job she absolutely loves.

And didn’t Miguel and Rebecca move out there to be close to Kate and her kids?

If Toby is offered this position, then someone will feel like their needs are coming in second no matter what decision they make, and that won’t be good for their marriage.

Toby really needs to start talking to Kate about these things, or these two will end up miserable.

Sarah: Toby pursuing a job in San Francisco will undoubtedly cause some tension between him and Kate, and rightfully so. He one hundred percent should have talked to her before he made that call.

I have a bad feeling that they’re headed for an explosive fight à la Kevin and Randall.

Jack: Yeah, Toby making this unilateral decision was not good news. This Is Us could be doing another bait-and-switch, but it seems to me that we’re headed for the beginning of the end of Toby and Kate.

Also, it sounded like the job opportunity came up weeks ago, so I was secretly hoping he missed it already by the time he decided to call.

With the season finale approaching and the news that Season 6 will indeed be the final season of This Is Us, what do you hope to see as the series heads toward its conclusion?

Please give me a family drama I can relate to and do something that hasn’t been done before. I don’t know what that is, but I’d like to see it nonetheless.

Christine: No offense to Jack, but I’ve seen enough of his story.

I want to know how Rebecca and Miguel became a couple. I want to know who is alive, dead, or divorced in that flash-forward we keep seeing.

They’ve teased us with so many questions, and it’s time to start giving us answers.

Sarah: I agree with all of the above!

Why is Nicky at Rebecca’s bedside instead of Miguel?

What is Annie up to?

I do not doubt that all of these questions and more will be answered by the time the series finale comes around.

I am just going to sit back and enjoy the ride. Hopefully, there’s a surprise or two in store for all of us.

Jack: I enjoy the misdirects. No one does a surprise twist like This Is Us!

But yes, it’s time for answers.

I want the rest of the flash-forward and how we got there.

And I want to see more of future of Jack D and his family, along with learning how Rebecca and Miguel got together in the past.

Your turn, This Is Us fanatics!

Want to refresh your memory first? Just watch This Is Us online right here on TV Fanatic.