Will the Mayans survive after that dud of a mission?

Mayans M.C. Season 3 Episode 3 found Bishop accelerating the plan to move the product, but he learned the hard way that throwing your weight around will not make you any friends.

The final half of the episode was genuinely nail-biting. It had just the right amount of tension when the product was being moved, purely because there was a good chance something terrible would happen. 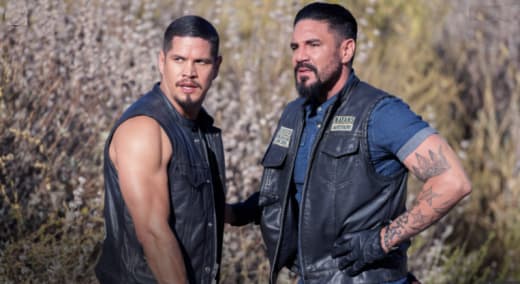 It was no coincidence that the police arrived. Someone called because they didn’t like how the Mayans were conducting business, and as much as the show would probably like us to believe it was Vicki, it’s going to be someone else entirely.

The more significant issue here is that EZ suggested they cut out the middlemen and had just one King to work with it. It was becoming tedious with all of the back and forth, and everyone agreed to EZ’s plan, but I suspect there will be blowback headed in his direction when the truth inevitably comes out.

Now that their plan has been intercepted, the Mayans know they are in trouble, but who will be the fall guy in this scenario?

Montez and Happy were already sniffing around and warned them about going on to their turf so that successfully set up yet another enemy for the Mayans.

The Santo Padre iteration of this motorcycle group is adding enemies like it’s going out of fashion. We’ve been promised the series is going darker, and based on the events of this episode alone, it’s believable.

The writers feel much more confident in taking big swings this season, and it’s a sign they believe in the story’s direction. But will that result in significant deaths?

The Mayans are not performing as well as they should be. Of course, Coco is the weak link. He’s now fully hooked on drugs, and J.R. Bourne’s mysterious character has proof of it.

Will he send it to the Mayans, or will he use Coco to get whatever he wants away from the mountain?

Coco’s past was more tragic than I anticipated. What looked like a young kid tending to a parent’s wound was actually a kid forced to inject their parents with drugs. That’s messed up.

The Meth Mountain arc is a little bit out there, but on a show like Mayans M.C., it fits into the narrative reasonably well, especially if it’s going to shed light on Coco’s past.

The drug mule in jail is certainly a big issue since she’s essentially being coached to tell the truth for the sake of her family. 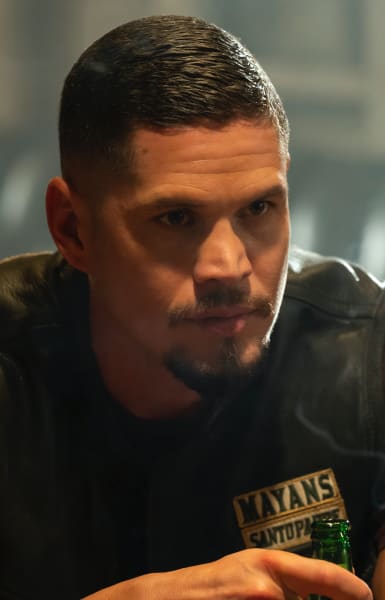 Ten years is a long time to spend away from your loved ones, but the loved ones will undoubtedly be put in danger if the Mayans learn she’s thinking of telling the cops everything.

Is it just me, or did Erin have a better read on Emily and Miguel’s relationship than Emily did?

From their awkward kiss, she could tell they were not finding comfort in each other’s arms. She perfectly used that one moment to drag answers out of her sister.

There’s a good chance Miguel hasn’t dumped Emily because he knows she and their son would be in harm’s way away from the house. They’re probably the most hated family in that corner of the Earth for their actions.

As much as Emily wanted to try to right the ship in their relationship, Miguel has moved on. That ship has sailed, and he’s no longer attracted to her.

You need to nurture relationships to keep them flowing, but something tells me Miguel will wind up sleeping with Erin by the end of Mayans Season 3, creating a massive rift between the sisters as a result.

Erin is an excellent new addition to the series, but it’s clear she doesn’t know much about what she’s gotten herself to by living with her sister.

Everyone in town hates them, but Erin is not the type of person to allow people to talk smack about her family. That much was clear when she verbally attacked the man who hit the car with the slushie.

The episode-ending reveal that Ableita was back in Santo Padre took me by surprise. It certainly seemed like the entire episode would be without her to give us a big Ableita episode down the line.

It’s hard to decipher what her machinations are in returning to Angel. Then again, everything she loved and fought for in Mexico was gone, so her life was very much on the line wherever she went across the border.

Angel has been trying to move on, but he’s obviously not been happy.

“Overreaching Don’t Pay” was a solid follow-up to the Mayans Season 3 premiere. It successfully introduced even more conflicts, throwing the future of our favorite group into doubt. 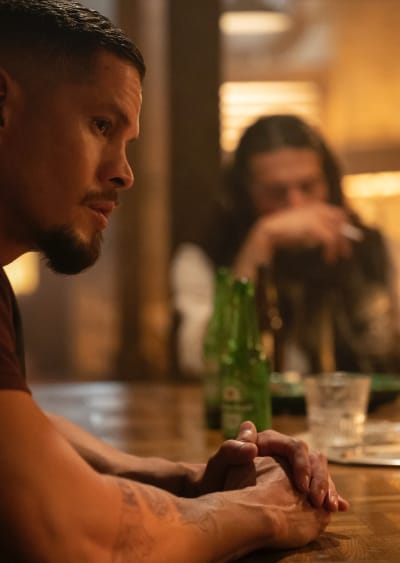 The only question remaining surrounds which side will strike first?

What are your thoughts on the botched mission? Do you think EZ will take the fall for it? What does Ableita want with Angel? Do you think Miguel will sleep with Erin?