This Is Us Season 5 Episode 10 Review: I Got This

Everyone has at least one annoying family member who thinks the world should do everything their way, and  This Is Us Season 5 Episode 10 deftly explored those dynamics.

For every person who was annoyed, there was someone who thought they had good reasons to do what they did, making this one of the most compelling This Is Us stories yet.

Carol did a great job of being that critical mother that was never pleased with anything.

First, she thought Beth put too much pepper in and then thought she didn’t put enough.

Is there anybody who doesn’t have a Carol in their life? This was equal parts relatable and aggravating.

And yet, Carol wasn’t a one-dimensional annoying mother/mother-in-law/grandmother. She never is, but it was especially obvious this time because Tess saw her as a great confidante and Beth as controlling and judgmental.

Interesting how history repeats itself throughout the generations, isn’t it?

As a side note: I’m thrilled that Tess has a non-binary dating partner and I can’t wait to meet Alex!

Non-binary people are starting to be more prominent on television than they used to be but they are still an extremely underrepresented group.

And I am sure that This Is Us will do a good job depicting Alex accurately once we meet them.

I don’t know why Beth didn’t catch on to who Alex was to Tess, though. I figured it out the second Tess began texting them non-stop.

But in any case, I was impressed that Carol fully understood and accepted Alex for who they are, and I am curious whether that will continue once Carol and Alex meet in person.

I’m also glad Beth and Carol had it out.

Beth: So my daughter doesn’t feel she can talk to me. That’s another thing you can add to your list.
Carol: I don’t have a list.
Beth: Yes you do, Ma. I didn’t use enough pepper and there are phones at the table and I can’t control my kids. This is how we are, Ma. We are loud and we are chaotic and the only time I feel self-conscious about it is when you are here and I can’t relax until you go home and take all the damn judgment with you.

While Carol’s judgmental comments were annoying, a good deal of the problem rested with Beth, too.

Beth was afraid of her mother disliking the chaos and kept trying to adjust accordingly, like when she collected the cell phones. That wasn’t what she wanted to do; she just wanted to please Carol.

Hopefully, now that she knows that Carol enjoys being around their loud, disorganized family, she will relax and parent the way she wants to parent, not the way Carol thinks she should.

I knew as soon as Carol mentioned her house being too quiet that Beth would invite her to stay. I hope this means Phylicia Rashad is on-screen on a semi-regular basis!

Carol’s interactions with Alex and anyone else any of the kids bring home should be interesting, and I’m sure there will be more head-butting between her and her equally strong-willed daughter as time goes on.

Randall: You are so mature and grown that sometimes I forget at the end of the day you’re just a fifteen-year-old girl in love for the first time.
Deja: That’s why I’m mad at Malik. That’s not why I’m mad at you. Before I came into this family, I had no one who was in my corner. Then I met you. I know you have this thing with Malik, but you’re supposed to be my Day 1.
Randall: Deja, I am your Day 1. Always and forever, I am Team Deja.

And how sweet was Randall’s conversation with Deja?

I don’t blame her one bit for being insecure about Malik and about whether Randall is truly on her side, given her history.

Randall was in a tough spot. Malik talked to him in confidence, and it wasn’t really his place to tell Deja anything. But he might have encouraged Malik to tell her what was going on sooner rather than later.

Every situation is different. But not knowing my birth mom left a big hole in my life. So I guess from my experience, if I had known my birth mom it would have saved me a whole lot of time in therapy.

I’m not sure that Randall’s advice was best for Malik’s situation, either. Randall did acknowledge that every situation was different, but his opinion was still colored by his own experience.

I don’t trust Jennifer not to be in the way of Deja and Malik’s relationship, and was I the only one who was worried that she might try to take the baby for herself?

Something set off alarm bells for me about how her parents wanted to put Janelle up for adoption and now she’s suddenly back. 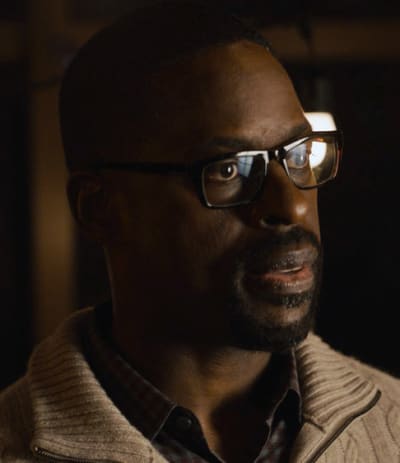 In any case, I have a feeling that Malik letting her back into his and Janelle’s lives is going to blow up in his face.

As for Kevin vs Toby, I understood both points of view.

As a kid, my family always went on vacation with my uncle’s family. One of my cousins was a year older than me and the other was my older brother’s age, so we were like one big family.

And that’s what Kevin wanted.

But Toby is feeling ashamed and inadequate right now because of his job situation, and the fact that Kevin makes so much more money than he doesn’t help.

So it was natural that Toby wanted the space to raise his own family his way and didn’t want to consider letting Kevin babysit or letting him help out financially.

The parallel between Jack’s financial faux pas and Toby’s situation was interesting.

Jack didn’t want to take the out Miguel offered him because he felt he didn’t fit in with his richer colleagues and wouldn’t get the promotion he wanted if he didn’t play along, just like Toby felt awkward around Kevin.

Hopefully, though, Toby can swallow his pride at some point. I’m glad that Kate decided to go back to work, though I’m afraid Toby is going to feel even more like a failure because she’s working and he’s not.

As for Kevin, I can’t wait for his interactions with Uncle Nicky!

Nicky has become one of my favorite characters, and when Kevin got that knock on the door it flashed through my mind that it could be him.

I have never been more thrilled to be right!

Your turn, This Is Us fanatics. What did you think of Toby’s reactions to losing his job and Kevin’s offer to help, Beth’s decision to let Carol stay indefinitely, and the new developments in Malik’s life?

Want to refresh your memory first?  Watch This Is Us online and then come back to share your opinions!

This Is Us airs on NBC on Tuesdays at 9 PM EST/PST.