This Is Us Season 5 Episode 9 Review: The Ride

One of the things I love about This Is Us is how effectively it plays with time.

The best stories happen when the series blends past, present, and future to depict how the Pearson family changes over time and how they are ultimately the same.

This Is Us Season 5 Episode 9 was an especially poignant example.

I wasn’t sure that the Jack/Rebecca story would be great because we’ve lived through a lot of the Big Three’s early years already.

But the ride home worked as a parallel with Kevin and Madison’s journey with the twins.

In some ways, it seemed like history repeated itself with Kevin. Both Kevin and Jack were interrupted by strangers while trying to install car seats, almost got into a fight with another driver on the way home, and needed their partner to rein them in.

Jack: Hey! I got three newborns in the car!
Other Driver: So? That’s not my problem.

It all went to show that Kevin’s fears about not living up to the idealized version of Jack in his head are mostly unfounded.  Kevin can’t help being like Jack because they are so much alike anyway. 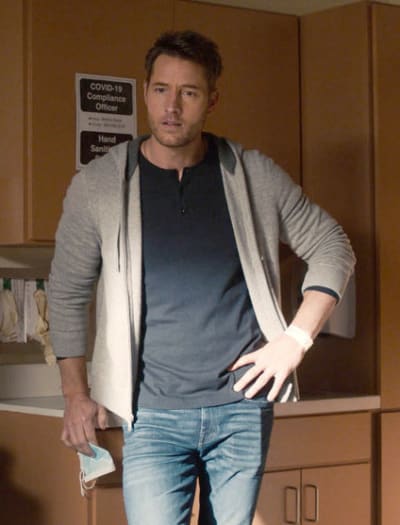 Of course, Jack almost went down a bad path again with alcohol while Kevin was just sleep-deprived. And Kevin having twins instead of triplets is a reminder that even though he and Jack have similar stories and personalities, they are also two different men with their own lives.

Do me a favor and stop trying to live up to me. I was terrified of being like my dad and you are terrified of not being like yours. We both wasted a lot of time being quietly terrified. Close your eyes, decide what you want, and then you go and get it, son.

Kevin’s ghostly visit from Jack was my favorite part of the hour for that reason.

All this time, Kevin has been struggling to prove to himself that he’s as great as Jack, and now that he’s about to begin his own parenthood journey, he needs to let that go and be the father he needs and wants to be.

It’s sad that Jack isn’t there to give him advice in the flesh, but the dream sequence was everything Kevin needed and everything Jack would have said if he was there.

And Jack cemented the parallel nature of their lives, too, when he pointed out that he and Kevin both wasted a lot of time being afraid of not being good enough fathers.

Obviously, that dream is what made Kevin finally take the plunge and propose to Madison.

I’m glad she said Yes. I was afraid she wouldn’t, and we’d have more heartbreak and angst. And even though I initially didn’t like this couple, they’ve been growing on me, too.

I was also glad that Jack’s decision to drink wasn’t as bad as it could have been.

Jack was responsible enough to have Rebecca drive after he drank.

I’m not sure how realistic it was for a woman who recently gave birth to triplets to be doing the driving, but then again, I’m not sure how long after the birth this was supposed to be.

In any case, it was a better option than Jack driving drunk, and that demonstrated that he was thinking about his family’s safety now even if he did make the wrong choice.

The best part of all of that was his conversation with Rebecca, where they shared their insecurities.

Rebecca’s fear that parenthood had irrevocably changed her felt realistic to me, and I was thrilled that she was nonjudgmental and supportive when Jack admitted he’d drank the whisky.

Rebecca isn’t always the most patient person in the world, and she was stressed out too. But they were able to move forward as a couple and reassure each other that they could make it as parents.

You don’t suck the air out of the room. You are the air.

Talk about a three-tissue moment!

Kate and Toby also got some emotional stuff thrown at them with Ellie’s decision not to be part of their lives for the time being and Toby getting laid off.

I wasn’t surprised that Ellie changed her mind about the open adoption. She struggled with letting go of Hailey after she was born, and being around her right now would be painful and make her feel an attachment she isn’t prepared for at the moment.

Toby: I am sorry that Ellie is hurting. But we also knew that this was a plan and that plans change.
Kate: I grew up with a brother who didn’t know his birth parents. I promised myself when we decided to adopt that Hailey wouldn’t be like that.

Kate’s feelings were also understandable, though. She didn’t want Hailey to have any of the same psychic wounds that Randall had because of not knowing his birth family.

Of course, Randall’s situation was made more difficult both because Rebecca actively interfered with William’s desire to get to know the son he gave up and because of Randall growing up as a Black child in a White family.

You know, when I was a kid, I had to do a family tree and it wasn’t quite right. I knew they were my family, but they weren’t where I came from. That’s why you and your sister and your mother are so important to me. You’re my branches.

And as Toby said, he and Kate will make sure that Hailey knows who her birth mother is even if Ellie never chooses to be part of her life again.

Speaking of Randall, who else guessed that the pregnant medical resident was Deja?

I suspected from the beginning that this was a jump to the future for Randall’s family, and the woman looked and sounded enough like Lyric Ross that Deja seemed the most likely bet.

I totally was wrong about Annie, though. I thought the other woman in the car was Tess and then second-guessed my assumption that the pregnant woman was Deja because it could have been Tess’ partner.

In any case, Deja’s pregnancy made Rebecca’s last days even sadder. Rebecca is presumably lost to dementia at this point and will never know her grandchild.

Your turn, This Is Us fanatics!

Which of the rides home did you find most emotional? Hit the big, blue SHOW COMMENTS button and let us know!

Want to refresh your memory first? Just watch This Is Us online right here on TV Fanatic.

This Is Us airs on NBC on Tuesdays at 9 PM EST/PST.