Days of Our Lives Round Table: Who Stole the Twins?!?

Chad’s world imploded as he realized how Gwen had set him up, Lani and Eli’s twins were stolen from the hospital, and Rafe rescued Ava, but Charlie’s still on the loose in Salem.

Our TV Fanatics, Jack and Christine, are joined by Monica from MyHourglass, a Days of Our Lives fan forum, to debate who wants those twins, if Chad should ‘fess up to Abby, their feeling for Ava, if Chloe should out Philip to Brady, and more!

Do you think Chad actually had sex with Gwen, or did he pass out before it got that far? Should he tell Abigail the truth or allow Gwen to blackmail him?

Monica: He probably didn’t have sex with Gwen, but it’s the perfect setup for a deception/blackmail plotline.

He could have said he wasn’t sure, but maybe, and then he’d have been the victim. But then we wouldn’t be subjected to a months-long deception/blackmail plotline.

Jack: I don’t know, and really don’t care. It disturbs me that we have yet another guy too drunk to consent being portrayed as a consensual encounter.

I can’t stand that Chad distrusted Abby so much and don’t want them to be together anymore, yet he also had sex he couldn’t consent to and is being vilified for it.

The sooner this story goes, the better. And yes, he should tell Abigail the truth. I’m so sick of these idiotic blackmail stories where people give in to the weakest of threats.

Christine: I have to say I see this differently. Chad was drunk, but he was literally begging Gwen to have sex with him, so I find it difficult to say he was taken advantage of. I hope he passed out before anything happened, but I wouldn’t care if I were Abigail.

Chad didn’t trust her, was easily misled to believe she was cheating on him, and then he planned to cheat on her. Whether Chad had sex with Gwen or not, the intent was there, and it’s caused severe damage to their marriage.

Dr. Raynor stole the twins from the hospital, but with whom do you think she’s working, and why do they want Eli and Lani’s twins?

Monica: This is a head-scratcher. The last time she worked for Xander and Victor, but I can’t imagine why either of them would want to steal the babies. Could Vivian be involved in a revenge plot since it was Lani who shot Stefan?

Jack: Here’s my out of left field guess: Gabi. Gabi tried to destroy Eli and Lani’s marriage. That failed, and when she came back, she discovered that they were about to be parents.

Gabi still has the Dimera name and clout, so why wouldn’t she use it to steal Lani’s babies? She might even try to get on Rolf’s good side by having them delivered to him to experiment on.

Christine: My guess is Vivian. She blames Lani for Stefan’s death, and Vivian isn’t the type to forgive and forget. I can see her wanting to punish Lani by stealing her children the way Vivian perceives Lani took her son.

Kate and Jake reconciled and are making their relationship public. What’s your reaction?

Monica: I love this storyline. I don’t think either one is scheming to exploit the relationship; I think they genuinely like each other.

And I really am tickled that we’re seeing a young guy attracted to a woman in her late middle age. Kate still has it, and so do a lot of older women!

Jack: I find this pairing strange, but if we’re going to have them, I’m glad that Kate decided to be an adult and go public with their relationship. There was never any need to sneak around, so why start now?

Christine: These two have really grown on me. Neither is perfect, and they not only accept one another’s flaws, but they actually like one another.

Jake has shown a much sweeter side with Kate, and Kate is more vulnerable when she’s with Jake. I find Jake and Kate to be an intriguing couple; now I’m just hoping that Gabi doesn’t come back and ruin it.

Have your feelings concerning Ava Vitali changed at all since her return to Salem?

Monica: Not really. I believe she really was very happy to be reunited with Tripp, but she was still scheming all the way until Charlie got in the way.

I suppose she deserves some sympathy for having been drugged and believing that Charlie killed Tripp, but it’s a little hard to muster considering everything she’s done.

Jack: Not really. I feel bad for her that she was kidnapped and drugged, and it’s nice she wanted to do the right thing, but it’s weird to see the woman who kidnapped Kayla and forced Steve to have sex with her to be excoriating Charlie over having raped someone.

And I don’t blame Kayla for wanting to get a different doctor to treat Ava. Talk about a conflict of interest!

Christine: I’ve always despised Ava, so I’m shocked how much I’ve enjoyed her character since she’s returned to Salem this time.

Ava’s done despicable things, some that can’t be forgiven. But I’m reminded of how she was abused by her father for much of her life. She has one son she’s lost a lifetime with and another so damaged that he’s psychotic, so I’m feeling sympathy for Ava that I never expected to feel.

Should Chloe out Philip to Brady? Should Philip go to his father or the police for help?

Monica: I thought it was really inconsiderate for Chloe to hint to Brady about Philip’s situation. Philip has also been so devious with respect to his father and Titan that I don’t believe he deserves help.

I hope Xander gets the evidence he needs against Philip and that Victor fires him.

Jack: Philip should go to both his father and the police. His excuses about going to jail himself are ridiculous. I don’t know why he thinks Victor would want him to serve the maximum sentence.

And in any case, he’s in a perfect position to make a deal. If he testifies against the higher-ups in the mob, he’ll probably get off with little to no jail time, and Victor would protect him from any retaliation. Sheesh. 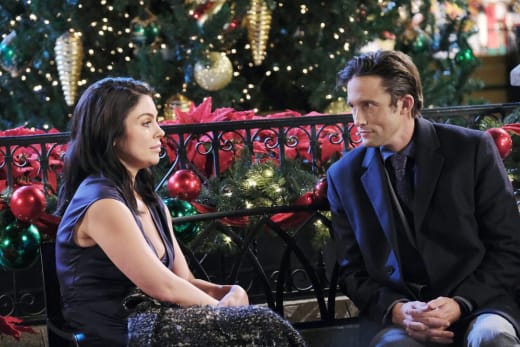 Christine: No! Chloe telling Brady is completely wrong. Brady doesn’t really have the means to help, and he doesn’t need to be drawn into Philip’s mess.

I can understand why Philip won’t go to the police. In reality, if you turn on the mob, you end up dead or in Witness Protection, where you have to leave your family and friends.

Victor is the person he needs to help him get out of this mess because once you work for the mob, they don’t let you walk away. Victor can broker some sort of deal to get Philip out of this. The downside, of course, is that he’ll probably never trust his son again.

Who was the most annoying person this week in Salem?

Monica: Just one?? In no particular order: Chad for believing Abby would cheat on him; Kristin for getting jealous over Brady’s and Chloe’s friendly kiss (I want to know why the Spectator sent a photographer to cover that lame NYE party, with only half a dozen people in attendance!)

Sarah for her cutesy girly talk; Clare and Charlie for their awkward “soul mate” conversation; Valerie for assuming that one of the twins would be named after her. I could go on…..

Jack: Sarah, no doubt about it. I could barely stand to watch her stomping around and whining because she wasn’t the center of Xander’s attention. She is selfish, childish, and generally obnoxious.

It’s a shame because the actress is great, and this is a legacy character! But she needs to go until she can learn to be a grown-up.

Christine: Bonnie! What is up with the ever-changing accent? And when my daughter was a baby, I HATED people who would come up and think they had the right to touch her without asking. Rule of thumb, if it’s not your child, NO TOUCHING!

And Claire whining about how she’s not a teenager, declaring a guy she’s only dated a few times is her soulmate and bringing him back to her parents’ home while they’re away so she and Charlie could have sex was nauseating.

What was your favorite quote, scene, or storyline from Days of Our Lives New Year’s week?

Monica: I was happy to see Valerie return. She looks gorgeous! I wouldn’t mind a storyline that has her and Abe getting back together. Every other character in Salem gets a love life except poor Abraham. I think it’s time again!

Jack: I loved Abe and Valerie’s discussion about resuming their relationship. Two adults talking honestly was so refreshing. I don’t know how long Valerie is staying for, but I hope she sticks around and she and Abe give it another try.

Christine: I loved that when Gwen tried to say that Jennifer had misheard her, Jack immediately backed his wife’s ability to get a quote right.

Chad’s expressions as he realized how badly he’s screwed up were priceless, as was Abigail not cutting him any slack.

Chad: Do you have any idea how paranoid that sounds?
Abigail: You don’t really get to talk to me about being paranoid right now.

And I know some folks are annoyed by Sarah, but I actually enjoy her and Xander’s antics. They are a bit of rom-com fun that Days needs right now.

Now it’s your turn, TV Fanatics. Hit that big, blue, SHOW COMMENTS button down below to chime in with your thoughts on Days of Our Lives.

And if you want to chat more about Salem’s happenings, then check out Jack Ori’s Days of Our Lives review here at TV Fanatic.