That is exactly what Mel did in Virgin River Season 2 Episode 1.

In the season one finale, Mel finally decided to give things a chance with Jack when she found out Charmaine is carrying his baby.

Whenever things got rough my instinct was to head home because that’s where I felt safe. But I realized that the idea of home doesn’t really exist for me anymore, because you were my home.

Naturally, Mel was concerned and ran back to Los Angeles to get her bearings. She already has enough baggage on her own, and now has to deal with this.

In Mel’s mind, she and Jack have barely started and they can just as easily stop. Charmaine is giving Jack something Mel can never do.

Jack, however, does not feel that way whatsoever.

Mel: She’s gonna be the mother of your child. You have the chance to have a real family, and I just – I can’t be the person to stand in the way of that.
Jack: Well, here’s the problem: I’m not in love with her.

Jack has made his feelings (or lack thereof) for Charmaine VERY clear. It hasn’t stopped Charmaine from her entitlement, though.

Charmaine basically told Mel she wanted this baby with Jack, and not in a friendly co-parenting way, but a we’re-going-to-be-together way. That conversation is pretty much what sent Mel out of town in the first place.

Slight rant, but Charmaine is such an annoying character. She told Jack she loved him, and he was like “oh this is awkward.” Then she gets pregnant and thinks he would suddenly change how he feels for her. She wants to blame Mel, but Mel never forced herself into their relationship.

A baby will never make a man automatically want to be with and marry you. Not in the 21st century.

One could start to feel empathy for Charmaine, though, in this episode as she has a case of hyperemesis gravidarum (severe morning sickness).

Charmaine has fired her OB and hired Doc, instead. Considering Mel is the midwife in town, she consults on the case, too. Charmaine can’t help but be a little snooty towards Mel.

I just found out that my pregnancy is high-risk, and you don’t have any kids, you’ve never been pregnant, so please just don’t pretend like you know how I feel.

Sure, Mel hasn’t made it known to everyone in town about being widowed or having lost a child. That still doesn’t give Charmaine the right to attack Mel for having “never been pregnant.”

Mel has maintained a very professional amount of patience with Charmaine. She deserves a medal, because couldn’t be me!

Despite Charmaine’s attitude towards Mel, Jack asks Mel to take her on as a patient.

This takes some serious consideration on her part. She first had to talk to Mark about it, who would have told her to put her personal feelings aside, and treat the patient.

Then she spoke with Doc. The relationship between Doc and Mel was uneasy in the beginning, to say the least. Now, though, they seem to have grown a familial bond in addition to their professional relationship, which is adorable to see.

I think meeting you made Jack realize what is possible. And even if you left Virgin River today, I don’t know if he’d be able to go back to a relationship where he wasn’t fulfilled.

Mel is really concerned she may be keeping Jack from having a real family. Doc, though, quickly points out that Jack wasn’t fulfilled in his relationship with Charmaine. He can’t go from feeling what he felt for Mel to settling for Charmaine.

Doc has a little relationship drama of his own to deal with, though.

Doc and Hope have reconciled, but she is not making it easy on him.

Hope insists on keeping their relationship a secret, while Doc wants to show her off in public and hold hands in the middle of town.

Doc: I don’t need spice. I want to walk down the street and be able to hold your hand.
Hope: Yeah, I hate all that “coupley” crap.

Hope is even going to the extreme of wanting Doc to date someone else.

When Muriel asks Hope’s permission to ask Doc out, that was the perfect opportunity to tell her “No, actually, Doc and I have decided to give it another try.”

But, no. We can’t rely on Hope to make things easy.

She refuses to be out in the open with Doc, but she wants Mel and Jack to get together ASAP.

Those two have more sparks than a Fourth of July parade. It’s a damn shame they aren’t together.

Jack is still mad at Hope for spilling the beans about Charmaine’s pregnancy to Mel in the first place. Hope will do anything to make things right with him again.

Including letting Charmaine stay with her.

Doc and Mel want Charmaine to stay in town to monitor her more closely, and Hope so happens to be the only one with room close by the clinic. Fingers crossed the two don’t strangle each other in their sleep.

Hope isn’t the only one who has something to say about Mel and Jack. 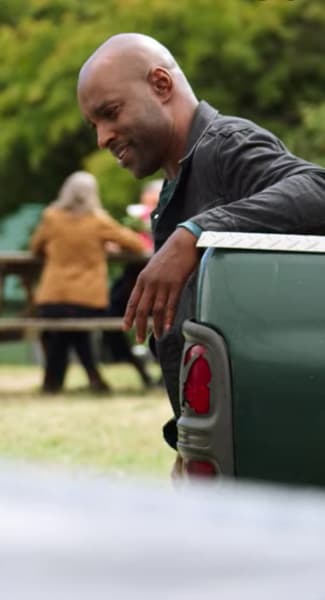 Preacher, noticing Jack’s dark mood since Mel left town (and returned after weeks of silence), suggests Jack just move on and let her go. It’s just not that easy for Jack, though.

Preacher: You gotta let her go. This whole thing between you and Mel, maybe it’s not meant to be. See, sometimes–
Jack: Preach… I’m in love with her, man.

Preacher can’t turn away from his own complicated situation, either.

It turns out the cliffhanger in the finale was all for nothing. Christopher cut himself, which was the blood Preacher saw in their house, and Paige drove to a doctor in Clear River.

It all seemed a waste, really, to stress out us viewers over nothing.

Paige (formerly Michelle) ran away from her abusive husband, who happened to be a police officer, too, which is why reporting him got her nowhere.

In opening up to Preacher, she finally finds a confidant. These two have definitely had sparks flying themselves, and Preacher goes so far as to offering them shelter in living with him.

Paige decides to take him up on that offer, and it seems she can finally breath and maybe have some happiness.

Paige returns home to find the babysitter was relieved by none other than Wes himself. There’s some drama we’ll definitely have to see unravel.

In the hiatus, this TV Fanatic read the first few books in the Virgin River series (there are 21!). While TV shows rarely mirror the books exactly, here are a few things we WISH this season would cover from the books:

Let’s see how closely this season follows the books.

Over to you, Fanatics! What do you hope for in this season? How do you think this baby situation will work for Jack, Charmaine, and Mel?

Sound off in the comments and share your thoughts!

Days of Our Lives Round Table: Ava’s (Officially) Back From the Dead!

Law & Order: SVU Season 21 Episode 20 Review: The Things We Have To Lose

Lucifer Season 6 is a Go at Netflix!