Just days after being forced to exit Dancing With the Stars, Jeannie Mai is sharing an update on her health with fans.

Taking to her Instagram Story, Jeannie posted a pic of herself standing in front of the mirror in her hospital room.

In the photo, she is seen wearing a t-shirt with the image of the “Vote Jeannie” billboard in Los Angeles her fiancé Jeezy rented to support her and DWTS partner Brandon Armstrong.

“No chewing no speaking no bad tshirts,” Mai said.

Jeannie was hospitalized just days ago after being diagnosed with an inflammatory condition called epiglottitis.

Mai announced her exit from DWTS on Good Morning America earlier this week.

“My doctors discovered a health concern with my throat which requires immediate attention and surgery,” Mai said in a statement.

“I am heartbroken that my DWTS journey has to end here. I have pushed myself to new limits, physically and mentally, and I am so proud of how far we’ve come.”

The ABC reality series said goodbye to Jeannie with a video segment in which she filled her fans in on what happened.

“I’m absolutely devastated on Dancing With the Stars has to end this way,” Mai said from the hospital in a clip that aired during the episode.

“I found out that I have a throat abscess where my tonsils and my throat gotten so infected that it started permeating to the rest of the areas behind my neck and my ears that I had to get emergency surgery which is why I’m here now.” 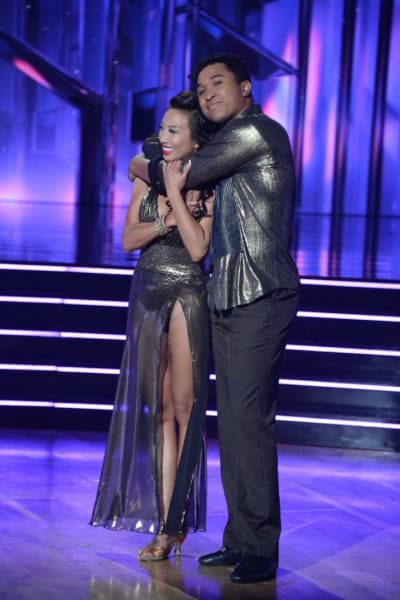 The surgery was successful, but the doctor stated that if Mai had waited one more day then her throat would have closed up.

“I was so relieved to hear that Jeannie’s surgery went well,” Brandon Armstrong, Mai’s partner shared in the clip.

“I couldn’t have asked for a better partner this season. She made this journey so special.”

Mai said in conclusion, “I’m so thankful that I even had this experience on Dancing With the Stars. It was hands down one of the best journeys of my life. So, thank you so much and I love you guys.”

We wish Jeannie a speedy recovery.