The day MAFS Fanatics have been waiting for arrived.

On Married at First Sight Season 11 Episode 16, we finally found out which couples stayed together and which parted ways, and while most of them were predictable, one came as a bit of a surprise.

Three out of the five couples decided to stick it out, but were they the ones YOU expected?

It was no surprise that these two didn’t stay together since Brett hauled ass ten weeks into the process and never looked back.

Except, apparently, he did?

Olivia and Brett were not compatible in any way, and they were one of the most uncomfortable couples to watch as the season progressed.

Initially, it didn’t seem as though they found one another attractive on their wedding day, but then that dissipated, only to evolve into something else down the road.

Olivia was at Decision Day simmering with hurt and hostility. She wore it like a cloak. Pastor Cal and the others honed in on it instantly.

When given a chance to speak her mind, she said that she wasn’t attracted to Brett, and it interfered with intimacy. Her attraction was always fleeting, and because of their different love languages, they clashed.

She was still angry at him for how he left things, and it showed. She contradicted herself a few times when talking about how he wasn’t treating the process one way or another.

She also said he was never genuine. It’s weird, Brett was an ass at times, but I never got the impression that he wasn’t authentic.

The experts and Brett also pointed out that it seemed as though Olivia had a specific idea of a partner in mind, and she wanted Brett to fit into that mold.

It has always been most glaring with Olivia that she wanted a partner she could assemble like a Ken doll. It didn’t matter what Brett did or didn’t do — Olivia wouldn’t have responded well.

For his part, Brett was giving off so many mixed messages. He left her, but then he was texting and calling her. Brett went from seeming disinterested to earnest. He was all over the place.

But they were back to their usual shade-throwing and sniping at each other when they met up with the group. Amani was Team Olivia, but the others seemed to stay out of it.

I feel like Brett and Christina are the two most expendable people in the friendship group.

Dr. Pepper was delighted with this couple since Amelia/Bennett was her pairing. The quirky duo worked out, and I don’t think anyone doubted they would choose each other by the end.

They both arrived with their unique style, two balls of energy, and light, and they made everyone smile.

Bennett’s grand gesture of showing Amelia how much he loved her was by getting a tattoo of her initials on his back hip.

And of course, it was a peak Bennett move to pull his pants down in front of Amelia and the experts to show it off.

The other couples thought Bennett’s tattoo was hilarious, and they were quick to celebrate the love between the lovable weirdos.

They also came together to decorate Bennett and Amelia’s car as they bid New Orleans adieu and embark on their new life in West Virginia so Amelia can start her residency.

Sure, we come for the matches and the couples, but the friendships between the participants are just as endearing. It was adorable to see this group of diverse friends bonded by this wacky experience send off two of their own.

The real shock of the installment was that Miles and Karen both decided to stay married. They got along well enough as friends, but for most of the season, it didn’t feel as though Karen was attracted to Miles, and it always seemed as though he put more into their relationship than she did.

They both looked absolutely stunning on Decision Day. Miles’ blue suit was chic, and Karen’s coral dress was gorgeous.

They’re such a beautiful couple when they’re sitting there together, but they’ve had a rocky road.

If we are going to be fair, Karen got a raw deal with a shoddy edit. It’s likely Miles and Karen clicked most when they were offscreen. However, the montage of their relationship showed how much fun the two of them do have together.

It’s just so easy to be distracted by all the other issues. Miles said his head and heart were at war. Logically, he felt as though he should’ve called it quits with Karen.

Miles didn’t feel as though he was getting the emotional and physical intimacy that he needed out of their four months together, and he was unsure if it would ever change.

His heart told him that Karen was the type of woman he still wanted to be with, and he cared about her and wanted to improve upon the progress they made in the last few weeks.

Kudos to Miles for being honest about his feelings and not mincing words at Decision Day. Usually, he’s so accomodating and diplomatic, choosing his words carefully and trying to spare feelings.

I imagine his straightforward response might be the type of “masculine” energy Karen is looking for, and it contributed to her deciding to stay with him.

It seemed as though even the experts were surprised Miles and Karen stayed together. I know half the internet was, and there are plenty of ladies, gentlemen, and others out there bummed they won’t get to shoot their shot.

But then, we’ll also have to see what the update is for this couple during the reunion special.

We all pretty much knew hell would’ve frozen over, and pigs would fly before Henry and Christina stayed married. Well, I thought we were all aware of that, but Christina seemed blindsided on Decision Day.

Sometimes it did feel as though Christina was in an alternate universe. As she recalled her experience, she had some glowing things to say about Henry, but some of it contradicted her complaints about him the whole time. 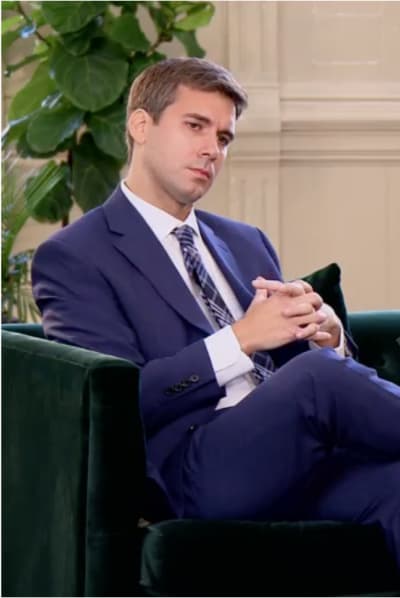 But she seemed as though she was weighing her options and no fully decided leading up to Decision Day. Thank goodness, she didn’t have to speak first, or it would’ve been embarrassing if she decided they should keep at it, and Henry brought up the gay thing.

Henry’s a quiet man, but he knows how to speak when he wants to, and he told the experts about Christina’s text message fiasco and how she blackmailed him with it.

It was an intense few moments as Christina went from claiming she didn’t know what he was talking about at all, to saying it was a friend who sent the message, to admitting she got some random text but didn’t believe it.

Henry said he had an issue with Christina’s dishonesty, and whether you’re a Henry fan or a Christina one, the situation was messy, and it did sound as if he caught Christina in a lie.

He never saw the text message in question, since Christina said her text messages delete after 30 days, but then the question becomes when did she get this text then?

If she got it, and she showed it to him when it happened, then it wouldn’t have been deleted, right?

Their conversation with the experts became about this text fiasco and whether or not Christina thought he was gay. They had the conversation before, and the experts brought up that Christina probably would cling to that to help her cope with Henry’s lack of attraction and interest.

Henry and Christina’s end was as bizarre as their entire experience on the show has been.

Woody and Amani are the other fan-favorite pairing, and the one everyone keeps saying should have a reality series of their own.

Hell, folks are already calling Amani the new Jamie Otis and are keeping their fingers crossed that she too can become the face of Married at First Sight.

Woody has come such a long way. He went from the one guy that chose who everyone had doubts about, including his friends and family, to this mature, loving husband and advisor to the others.

Many of us had doubts that Woody was cut out for marriage, but he proved us wrong. He had the most growth, and they were the best couple to watch during this season.

Despite the misleading promo, there wasn’t a doubt that the two of them would stay together. It was quintessential Amani to play a joke on Woody and say she wanted a divorce.

Woody and the judges were shocked, and their expressions were priceless.

The experts, much like most of the fandom, were so charmed by the two of them.

They both looked fabulous on Decision Day, and you could tell how much they complement one another. They’ve been such a fun couple.

It’s been an unprecedented season, and the show gave us some interesting couples. While I still think the experts’ matching process needs a hell of a lot of work, they had a successful season with some of the pairs.

But, as always, they kept you glued to the screen with this controversial marriage show.

Over to you, MAFS Fanatics. Did any of the results surprise you? Hit the comments below!

You can catch up on the entire season if you watch Married at First Sight online here via TV Fanatic.

Away: Cancelled by Netflix; No Season Two ...