Days of Our Lives Round Table: Team Xander or Team Philip?

Allie accused Tripp of rape, the rivalry between Xander and Philip heated up, Eli took drastic measures to save Lani, while Gwen and the Dimera mansion were blessedly offscreen!

Our TV Fanatics Jack Ori and Christine Orlando are joined by DoolFan4Life from MyHourglass, a Days of Our Lives fan forum, to argue over whether any good will come of Allie’s sexual assault story, if Xander or Philip should come out on top, if Eli’s plan will blow up in his face, and which were the most annoying moments this week in Salem. 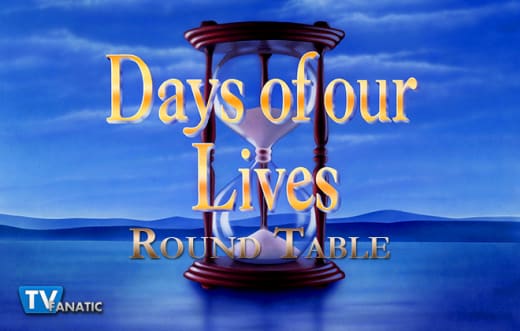 Is Allie accusing Tripp of sexually assaulting her turning out to be good drama, a compelling mystery, or victim shaming?

DoolFan4Life: Not even in the slightest, these writers have proved time and again that they don’t handle rape stories appropriately. I hate the idea of a false accusation, especially given the fact that she doesn’t remember anything.

Even worse, it was as if Nicole planted all this in her head when Allie repeatedly told her she didn’t remember anything. Nicole has already gotten the police involved without knowing any facts or having proof, and it didn’t happen in the States.

I also don’t like how Nicole is blabbing it around town when this was a confidential conversation.

Victim shaming will be a result because eventually, the truth will come out, and it will be thrown in Allie’s face, and at the end of the day, she is a victim; she just accused the wrong guy.

Jack: I could go on all day about how terrible this story is. It’s better than Ciara’s rape story, which isn’t saying much. But the focus is almost exclusively on Tripp’s difficulty as a result of being accused, and the fact that Allie was raped is secondary.

In fact, the story is everyone making Tripp guilty before proven innocent to show that they don’t approve of rape. That doesn’t do anyone any favors, and it’s also strongly implied that the only wrong thing was someone holding her down and NOT that someone had sex with her when she was incapable of consent because she was drunk.

The only one suggesting her intoxication might have impacted her ability to consent is the alleged rapist! Come on. This story yet again gives lip service to sexual assault being wrong and relies on stereotypes about rape.

I can’t believe that Kayla — a survivor herself — suggested that men just have a different idea of what constitutes a No and that no one brought up that Steve’s brother raped her or that that experience might be coloring her response to this.

Christine: Wow! This story went off the rails fast, but it shouldn’t be a surprise. Days has a horrible history when it comes to dealing with storylines involving sexual assault.

Allie’s story went from an unplanned pregnancy to a poorly executed adoption drama, to her not remembering anything because she was so drunk, and now, in the span of an afternoon, she remembers and accuses Tripp and all of Salem attacking him. My head is spinning.

I wish this had been a story about two people realistically dealing with an unplanned pregnancy, or even the life-altering risks of excessive drinking. Instead, it feels like we’re just waiting for Tripp to be exonerated and Allie to be shamed for accusing the wrong person.

Are you surprised that Kayla doesn’t believe Tripp?

DoolFan4Life: No, not really surprised at all. Kayla has her own violent history with Tripp, and she was also a victim of rape by his uncle, so I can see why she wouldn’t rule out the possibility.

I’m surprised and disappointed that a doctor like Kayla, who is also Chief of Staff, hasn’t even thought of a paternity test yet.

Jack: No. As I said above, she’s a survivor who was raped by her husband–Steve’s brother. So it’s not a stretch for her to think that Steve’s son might have raped her niece.

If anything, I’m disappointed that Kayla allowed Steve to make this about him instead of about Allie. As a survivor who has counseled other survivors, she should know better.

Christine: Given Kayla’s history as a survivor of sexual assault, and her unsettling past with Tripp, I suppose it’s not surprising that she might question whether he’s telling the truth.

Who are you rooting for in the rivalry between Xander and Philip, and why?

DoolFan4Life: I’m surprisingly Team Xander in this, and I hate how arrogant and mean Philip has been acting towards him. Philip has been written like the spoiled teenager we saw many years ago and not the compassionate, misunderstood man we’ve seen in his adult years.

I blame head writer, Ron Carlivati because he has butchered a lot of my favorite characters, so I shouldn’t be surprised he’s added Philip to the list.

I also didn’t think encouraging Jan to press charges for something Philip actually did was that big of a deal as they made it out to be. You just don’t go around threatening to kill people, period.

Jack: Honestly, I’m just rooting for this storyline to be over. If I had to choose one, though, I’d choose Xander. Philip acts like a snobby, entitled brat.

And by the way, regardless of his history with Jan, grabbing a woman by the arm and threatening to kill her is actually a serious crime, and Jan should have gotten a restraining order, as ironic as that seems.

Christine: Team Xander. I used to love Philip, but it feels as though all of the progress he had made growing up has been erased.

I don’t know why the show is trying to make Philip so unlikeable, but it’s working, and I’m very disappointed. All of my excitement over this character’s return has completely evaporated.

Now it’s your turn, Days fans! Are you Team Philip or Team Xander?

Eli secretly recorded Kristen’s confession and plans to turn it over the Melinda to save Lani? Will this work out or blow up in his face?

DoolFan4Life: It will definitely blow up in his face. Let’s be serious, Kristin never pays for her crimes, and she always manages to get out of it.

In the meantime, Lani will side with her when she finds out, as she’s made it clear where her loyalties lie.

Jack: Of course, this will blow up in his face. This is the second time he told Lani he would not do anything to hurt Kristen’s case and then went ahead and did it.

It’s not so much that he’s doing his job (though in this case, he’s allowing a corrupt DA to blackmail him), but that he’s not telling Lani the truth. She’s going to feel betrayed… again.

And the tape may not be admissible, though Kristen was stupid to talk openly with a cop and not expect it to be used against her.

Christine: Ugh. Yes, it will blow up in his face because he’s not telling Lani the truth. Lani got herself into this mess, and there’s no reason for Eli to not tell her what Trask is trying to do.

If Eli and Lani can’t find a way to stop hiding things from one another, their relationship will be one disaster after another. 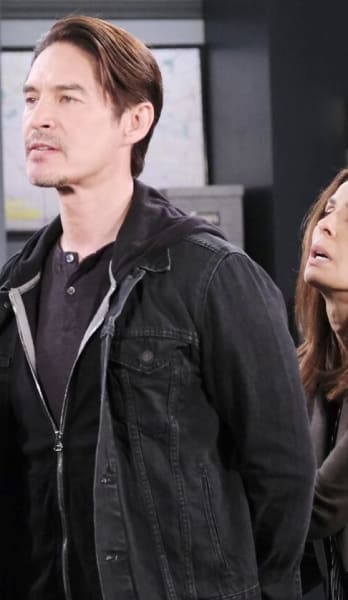 What was the most annoying plot or storyline of the week?

DoolFan4Life: The Allie show is definitely most annoying, as well as Nicole’s inability to keep her mouth shut. It’s really annoying that Nicole is spreading the word to anyone who will listen as it’s not her secret to tell.

Nicole and Julie must have formed a friendship offscreen as this was a Julie thing to do.

Jack: There was a lot to be unhappy about this week, but asking Vincent anything was a waste of time. Of course, he’s going to say Ciara is dead. And why would Hope believe that for a second?

If Vincent shot Ciara, why are there no blood splatters and no body? Especially if he shot her in the car!

And then to add insult to injury, Hope leaves Ben alone with the gun so he can plot to get revenge on Vincent. We don’t need a modern-day Hatfields vs. the McCoys situation, especially not one made worse by the acting Commissioner making rookie mistakes.

Christine: Nicole! What was up with her running around Salem, announcing that Allie was raped by Tripp? That isn’t her news to share. Who knows and when should be Allie’s decision, not Nicole’s.

And how has no one mentioned a paternity test on baby Henry? Not Kayla, a doctor, Justin, an attorney, or anyone else in Salem with half a working brain!

What was your favorite quote, scene, or storyline this week on Days of Our Lives?

DoolFan4Life: I like that Victor gave Xander another chance, and I’m hoping Xander will come out on top with this. I also liked that Gwen seemed to be offscreen, which is a huge bonus.

Jack: As much as I hate the way Allie’s rape is being handled, I liked her heart-to-heart with Claire. We don’t get enough scenes of people supporting one another nowadays.

Christine: I appreciated that Jan came forward and played Victor that voicmail message. I also liked that way Victor said that he knows who is son is. It gave me hope that perhaps he knows what Philip is up to behind the scenes.

Want to continue the conversation? Then hit that Big, Blue, SHOW COMMENTS button down below to chime in. Then check out Jack Ori’s Days of Our Lives review here at TV Fanatic.

The Best Shows and Movies to Watch ...