That was bonkers, but I wouldn’t have it any other way.

Ratched Season 1 Episode 3 dialed up the twists as Dr. Hanover’s past came to light, while Mildred came to a stunning epiphany, and it gave us our best episode of the series to date.

We’ll start with Dr. Hanover because he’s been an emotional mess ever since Ratched Season 1 Episode 1. However, I thought the root of his issues were more to do with getting recognition for the hospital.

He’s been an enigma, but the last thing I expected was for someone to want him dead. It all became clear when Lenore said she wanted him decapitated and would pay up $250,000.

That’s a lot of money in 2020, so I can only imagine how much it was worth back in 1947. It was an offer Charles couldn’t refuse. Given the way Lenore had to feed Henry, it was obvious something bad had happened.

When it was all said and done, however, Dr. Hanover was put in a dangerous situation by helping the youngster in the first place.

Henry was obsessed with pricking people with needles and other sharp objects, so there was never going to be an easy way to kick his obscure habit. 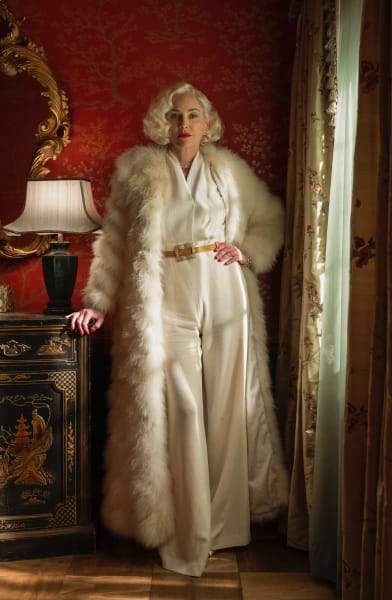 Henry, despite what he would like everyone to believe, was calculating his next move the moment Hanover tried to get through to him, so there was no happy ending in this scenario.

Hanover was drugged up because of Henry, and everything was heightened to the point that he didn’t know what was fact or fiction.

Henry’s actions were reckless, but they hinted that he didn’t want to be saved, at least initially. Cutting off his arms to replace them with the gardener’s made for some disgusting visuals, but Ratched is proving to be the goriest show of the year.

Hanover had to go on the run, but I can’t stress enough how much he should not be practicing medicine of any sort. After “Angel of Mercy,” he seems like nothing more than an evil genius.

Charles is a horrible man, who was checking out Mildred from the moment she arrived at the motel, and after their meeting on the series premiere, it seemed like something was brewing.

Telling Mildred she was the worst lay of his life highlighted how terrible he could be, so it was hardly surprising that Mildred would try to get on Hanover’s good side by saying she’d deal with the private investigator.

Mildred’s epiphany about Gwendolyn was not surprising. There was a hint that Mildred felt the same on Ratched Season 1 Episode 2, but she was fighting it.

Will Mildred come clean about her feelings, or will she continue to avoid Gwendolyn?

Speaking of Gwendolyn, the insight into her life was tragic. She and her husband don’t find each other attractive sexually, and married to keep up appearances.

It was a sign of the times they live in, but Gwendolyn is tired of living a lie and wants to do what’s best for her.

The once a month visits to the dive bars are simply not cutting it for her, and she’s ready to move on from her husband, even if he doesn’t want her to.

Her husband was still happy with keeping the charade going, probably because he was made partner in his law firm, and didn’t want people to talk about him for the wrong reasons, but Gwendolyn’s comment about him having sex with Billy the butcher was Cynthia Nixon’s best comedy delivery ever.

Yes, she was phenomenal on Sex and the City, but she’s something else on Ratched.

Dolly getting up close and personal with Edmund was so unprofessional, but is anyone actually professional inside the hospital?

Many people are fascinated with serial killers, which is why true crime dramas, documentaries, and everything in between garner lots of viewers and praise.

Dolly was already on Mildred’s radar because of the way she made fun of her when Nurse Bucket stole her peach, so this is just further ammunition when the time comes for Mildred to dole out her revenge.

Then again, knowing Dolly had a sexual encounter with Edmund could work in Mildred’s favor if she threatens to leak a story to the press.

Mildred’s aim has always been to save her brother from the iron fist of justice, and she would be silly to let an opportunity like this get away from her.

Dolly is actually a really good character, but does she really need to be chewing gum every single scene?

There’s a bigger issue at the hospital than the staff having sex with patients, and it’s the outlandish trials that are being carried out on the patients.

Huck and Mildred were both mortified by what happened in the bathtub. Essentially boiling someone to wash away her sexuality was horrifying to watch, but it was made worse by the blatant disregard for the woman’s safety from Nurse Bucket.

Bucket needs a grisly death, and Mildred will be happy to oblige when the time comes.

What do you think of Hanover’s past? Does he deserve to be pursued by a killer? What will Mildred do to Dolly?

Ratched is streaming on Netflix globally.