One Day At A Time Season 4 Episode 7 Review: The Politics Episode

Our beloved sitcom is back with a special animated feature on One Day At A Time Season 4 Episode 7.

The episode, quite literally titled “The Politics Episode,” was initially supposed to be live-action, but they opted to record it as an animated special.

And boy, it did not disappoint.

The Alvarez family indulge their minds in various scenarios as they prepare for their conservative cousins to arrive. These situations range from funny, to serious, to downright whacky.

Penelope: I don’t have years! There’s Cubans in an Uber right now, we still have no plan! Ugh, this is so much harder than I thought.
Elena: Changing people’s minds about politics is hard. How did you think it was going to go?

But every single one of these hypothetical situations taught us something, whether it was a completely new concept or an important reminder of what we already knew.

Before Elena suggested talking to their relatives about politics, Schneider had a suggestion of his own. He said that the Alvarezs should push down any emotion, regardless of how their feelings could affect them. Schneider even used his relationship with his father as an example.

Unfortunately, Schneider’s idea of ignoring your feelings is precisely what the Alvarezs should not do. Penelope insisted that they could not do that since they could not keep their mouths shut. However, there is a valuable lesson extracted from this scenario.

Penelope’s brain would not explode because their family didn’t know how to stay quiet; it would explode because of the mounting pressure building in her veins. Keeping everything bottled up inside is unhealthy, and in an already tense atmosphere, the entire family would eventually self-destruct.

Furthermore, Penelope has a history of mental health issues. It would never be a good idea for people to bottle up their feelings. Still, those who struggle with mental health might have a more difficult fallout if they did not have a healthy outlet to express their emotions.

Talk about your feelings, everyone, no matter how much it may hurt.

Once the Alvarezs decided to confront their relatives, Penelope dreams of the perfect scenario, where her cousins automatically see where they went wrong and just agree with her.

But any of us with relatives with different political views know this would never happen. People do not just change after a straightforward speech, and deep down, even Penelope knew that.

Life is never that easy. “The Politics Episode” showed how difficult it could be dealing with family members who have contrasting political views. Especially when Thanksgiving and Christmas come around.

Politics and family do not mix.

If everything were as simple as Penelope’s imagination was, she would not have spent so much time anxiously figuring out ways to deal with her cousins. There might not even be an episode in the first place.

Actually, not only would this episode not exist, but many pieces of media and other various works of art expressing a particular viewpoint would cease to exist. People use art as a way of expression, especially with current global events.

Imagine how dull this world would be without artists. It is impossible to imagine life without meaningful shows like One Day at a Time, always there to make us laugh while confronting serious issues. They bring their audience together by doing so. A lot of artists do that.

So, maybe it is not great having family members with opposing views. However, communicating with them and educating them through different forms of art, all while enjoying the work itself, makes it worth it.

As usual, One Day at a Time knows how to engage with their audience, regardless of the message they send.

One Day at a Time Season 4 Episode 7 taught us many valuable lessons. Still, perhaps the most useful of them all came toward the end when Elena came up with the perfect solution for dealing with their relatives.

Elena coming up with a solution, was a surprise, considering that she is arguably the one who feels strongest about their political opinions. Theoretically, she would be more likely to get in a fight with her cousins than Penelope. 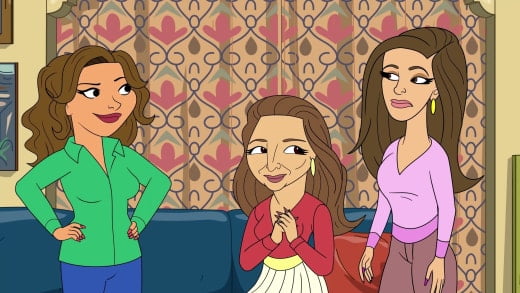 At first, Elena told Penelope to start calling out their relatives on past mistakes, since most people do not even care about facts anymore.

It turns out people want to believe what they believe more than what is actually true.

But in the end, Elena genuinely suggested having the unavoidable political conversation with their cousins by expressing things they care about.

We got to see the potential scenario play out if Penelope and her cousin, Estrellita, expressed their deepest concerns regarding the United States of America.

It turns out they have a lot more in common than either of them initially thought, and they were able to better understand each other.

Both Penelope and Estrellita just want what is best for America. If everyone — from politicians to neighbors, to strangers — expressed that we would be able to get a lot more done for the people living in America.

Communication is vital, and if we started by communicating with our friends and family, we would all get along better and understand each other more. Maybe we would even accomplish goals at a government level.

If I’m being generous, the things they care about are the same things we care about.

As usual, One Day at a Time nailed their message and left viewers thinking about their own impending events involving family members on an opposing end of the political spectrum. Now, we are better equipped to communicate with them, thanks to “The Politics Episode.”

Over to you, Fanatics!

You can catch up by watching One Day At A Time online right here, at TV Fanatic!